A man and his son were once going with their donkey to market. As they were walking along by his side a countryman passed them and said, “You fools, what is a donkey for but to ride upon?” So the man put the boy on the donkey, and they went on their way.

But soon they passed a group of men, one of whom said, “See that lazy youngster, he lets his father walk while he rides.”

So the man ordered his boy to get off and got on himself. But they hadn’t gone far when they passed two women, one of whom said to the other, “Shame on that lazy lout to let his poor little son trudge along.”

Well, the man didn’t know what to do, but at last, he took his boy up before him on the donkey. By this time they had come to the town, and the passers-by began to jeer and point at them. The man stopped and asked what they were scoffing at.

The men said, “Aren’t you ashamed of yourself for overloading that poor donkey of yours – you and your hulking son?”

The man and boy got off and tried to think what to do. They thought and they thought, until at last they cut down a pole, tied the donkey’s feet to it, and raised the pole and the donkey to their shoulders. They went along amid the laughter of all who met them until they came to a bridge, when the donkey, getting one of his feet loose, kicked out and caused the boy to drop his end of the pole. In the struggle, the donkey fell over the bridge, and his fore-feet being tied together, he was drowned.

Try to please everyone, and you will please no one.

“What I must do is all that concerns me, not what people think. This rule, equally arduous in actual and in intellectual life, may serve for the whole distinction between greatness and meanness.”

“What I must do is all that concerns me, not what the people think. This rule, equally arduous in actual and in intellectual life, may serve for the whole distinction between greatness and meanness. It is the harder because you will always find those who think they know what is your duty better than you know it. It is easy in the world to live after the world’s opinion; it is easy in solitude to live after our own; but the great man is he who in the midst of the crowd keeps with perfect sweetness the independence of solitude.” – From “Self-Reliance” in Ralph Waldo Emerson’s first series of essays 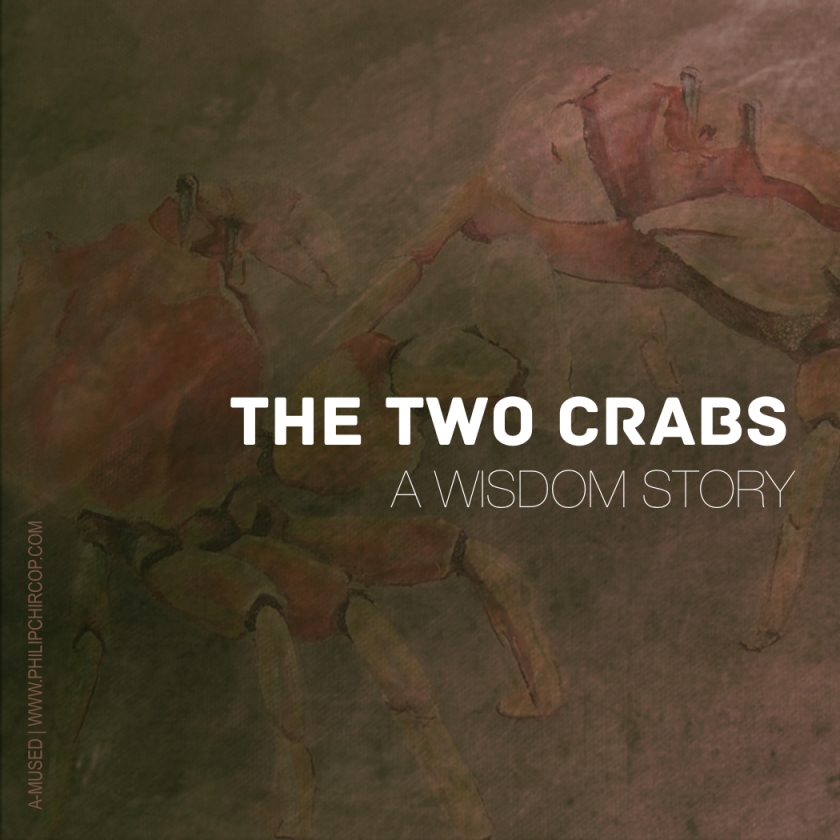 “Why in the world do you walk sideways like that?” said a Mother Crab to her son. “You should always walk straight forward with your toes turned out.”

“Show me how to walk, mother dear,” answered the little Crab obediently, “I want to learn.”

So the old Crab tried and tried to walk straight forward. But she could walk sideways only, like her son. And when she wanted to turn her toes out she tripped and fell on her nose.

A merchant who owned a donkey heard that salt was cheaper by the seashore, so he decided to go into the salt business. He went and loaded his donkey with salt and then headed back home. At a certain moment, the donkey accidentally lost his footing and fell straight into a stream. This caused the salt to dissolve, making his load lighter. The donkey was thus able to rise easily to his feet and enjoy a less taxing journey home. The merchant sold what was left of the salt and led the donkey back again to load him with an even greater cargo than before. As the donkey made his way with difficulty back to the stream where he had fallen before, he sank to his knees on purpose this time. Then, after his cargo had dissolved in the water, he leaped nimbly to his feet, delighted to have turned the situation to his advantage, or so he thought. The merchant realized what was happening and decided that the next time he would bring back home a big load of porous sponges. On their way back across the stream, the wicked donkey fell down on purpose as before. This time the sponges grew heavy with water and the cargo expanded. As a result, the donkey had to carry a burden that was twice as heavy as it had been to begin with.

A Salt Merchant drove his Donkey to the seashore to buy salt. His road home lay across a stream into which his Donkey tripped and fell by accident. When the Donkey got out of the water, his load considerably lighter, as the water melted the salt in the sack.

The Merchant went back to the market by the seashore and refilled his bags with a larger quantity of salt than before. When he came again to the stream, the Donkey fell down on purpose in the same spot, and, regaining his feet with the weight of his load much diminished, brayed triumphantly as if he had obtained what he desired.

The Merchant saw through this trick and drove the Donkey for the third time to the coast, where he bought a cargo of sponges instead of salt. The Donkey, again playing the fool, fell down on purpose when he reached the stream, but the sponges became swollen with water, greatly increasing his load. Thus his trick recoiled on him, for he now carried on his back a double burden.

It often happens that the same things which brought us luck can also get us into trouble.

A traveler who had to cross a desert plain hired a donkey to carry him on the journey, and offered the donkey’s owner a good sum to act as a guide. They set out early in the morning, the traveler riding on the donkey and his guide walking alongside. Soon they had left all greenery behind, and as the sun rose higher in the sky, the heat scorched their skins and parched their throats.

At last the traveler called a halt. Since there was no other shade, he threw himself down to rest in the donkey’s shadow.

“What right do you have to that shade?” protested the guide. “Move over – that’s my place to rest.”

“Cheat!” answered the traveler angrily. “Didn’t I pay you for the use of the donkey all day long?”

“You paid me for the donkey, it’s true,” retorted the guide, “but you never paid for his shadow!”

As they argued, neither remembered to keep hold of the donkey’s reins. Frightened by the shouting, the donkey took to his heels and ran off across the desert, leaving the two men with no shade to rest in and no beast to ride.

We lose what really matters when we quarrel over trivial, tangential matters.

There was once a crow who did not like his feathers.

“I wish I were a peacock!” he would say.

“You are beautiful as you are!” the other crows insisted.

“How plain and dull you seem to me!” he’d complain, and fly off to admire peacocks.

The peacocks strutted about with their colorful tail feathers outstretched. To the delight of the crow, some of the peacock feathers lay on the ground when the peacocks left.

Crow flew down to the ground and stuck the feathers into his wings and tail. He attached a few sticking up from his head.

“Now I am as beautiful as a peacock,” he said.

But, when he went to join them in their strutting, the peacocks poked him and pecked him. What a fuss!

Bruised and still dragging some broken peacock feathers in his tail, he returned home.

After all his insults, no one wanted his company!

As he sat alone, the other crows said, “It’s foolish to try and be what you’re not. Learn to love the feathers you’ve got!”

A hunter, not very bold, was searching for the tracks of a Lion. He asked a man felling oaks in the forest if he had seen any marks of his footsteps or knew where his lair was. “I will,” said the man, “at once show you the Lion himself.” The Hunter, turning very pale and chattering with his teeth from fear, replied, “No, thank you. I did not ask that; it is his track only I am in search of, not the Lion himself.”

The hero is brave in deeds as well as words.

In our dealings with God and with one another we are often like this hunter. We profess that we stand for something but when the full implication of what we profess stare us in the face we draw back.