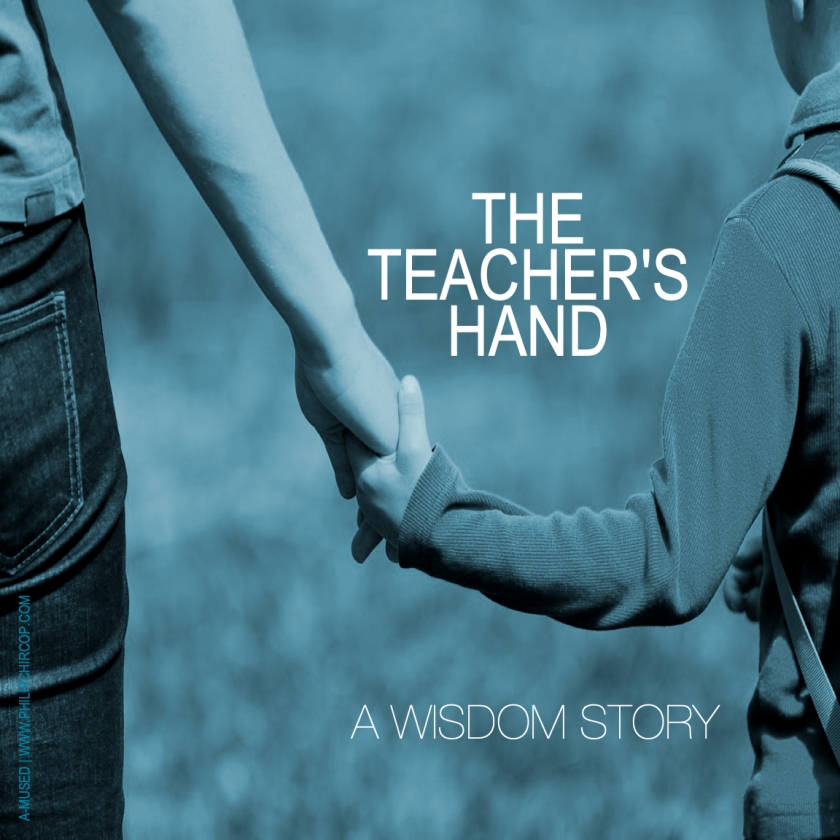 When Mrs. Klein told her first graders to draw a picture of something for which they were thankful, she thought how little these children, who lived in a deteriorating neighbourhood, actually had to be thankful for. She knew that most of the class would draw pictures of turkeys or of bountifully laden Thanksgiving tables. That was what they believed was expected of them.

What took Mrs. Klein aback was Douglas’s picture. Douglas was so forlorn and likely to be found close in her shadow as they went outside for recess. Douglas’s drawing was simply this:

A hand, obviously, but whose hand? The class was captivated by his image. “I think it must be the hand of God that brings us food,” said one student.

“A farmer,” said another, “because they grow the turkeys.”

“It looks more like a policeman, and they protect us.” “I think,” said Lavinia, who was always so serious, “that it is supposed to be all the hands that help us, but Douglas could only draw one of them.”

Mrs. Klein had almost forgotten Douglas in her pleasure at finding the class so responsive. When she had the others at work on another project, she bent over his desk and asked whose hand it was.

Then Mrs. Klein recalled that she had taken Douglas by the hand from time to time; she often did that with the children. But that it should have meant so much to Douglas  …

Today consider the silent language of hands: “Hands calm us, feed us, and scratch our backs. They intimidate, bless, encourage, and stop us. They soothe and caress. They draw our attention to the good and the bad, often suggesting exuberance or fear.” – Charles Flowers in the introduction to Elliott Erwitt’s Handbook

Today give thanks for the gift of hands in your life, your own and those of others who companioned and are still companioning you on the path of life: helping hands, affirming hands, encouraging hands, healing hands, open hands.

A young man who went to a rabbi and said, “I know that we are commanded to love God with all our heart, all our soul, all our mind, all our strength. But I know that my heart and soul and mind and strength have bad parts in them. So how can I love God?”

After a pause the rabbi replied, “It seems you will just have to love God with the bad parts too.”

A Zen student came to Bankei and said: “Master, I have an ungovernable temper — how can I cure it?”

“Show me this temper,” said Bankei, “it sounds fascinating.”

“Well then” said Bankei, “bring it to me when you have it.”

“But I can’t bring it just when I happen to have it,” protested the student. “It arises unexpectedly, and I would surely lose it before I got it to you.”

“In that case,” said Bankei, “it cannot be part of your true nature. If it were, you could show it to me at any time. When you were born you did not have it, and your parents did not give it to you — so it must come into you from the outside. I suggest that whenever it gets into you, you beat yourself with a stick until the temper can’t stand it, and runs away.”

The full story can be found in The unborn: the life and teaching of Zen Master Bankei, 1622-1693 by Bankei, Normal Waddell, translator

Getting angry and losing our temper is a sign of weakness. If we cannot hold our temper, it ends up hurting us more than the one at whom it was directed at. As the Buddha once said: “Holding on to anger is like grasping a hot coal with the intent of throwing it at someone else; you are the one who gets burned.” Think about that!

A rabbi asked his students, “When is it at dawn that one can tell the light from the darkness?”

One student replied, “When I can tell a goat from a donkey.”

“No,” answered the rabbi.

Another said, “When I can tell a palm tree from a fig.”

“No,” answered the rabbi again.

“Well, then what is the answer?” his students pressed him.

“Only when you look into the face of every man and every woman and see your brother and your sister,” said the rabbi. “Only then have you seen the light. All else is still darkness.”

Who is it that you are still excluding from the circle of your compassion?

A group of students were asked to list what they thought were the present “Seven Wonders of the World.”  Though there were some disagreements, the following received the most votes:

While gathering the votes, the teacher noted that one student had not finished her paper yet. So she  asked the girl if she was having trouble with her  list. The girl replied, “Yes, a little.  I couldn’t quite make up my mind because  there were so many.”

The teacher said, “Well, tell us what you have, and maybe we can help.”  The girl hesitated, then read, “I think the ‘Seven  Wonders of the World’ are:

The room was so quiet you could have heard a pin drop.  The things we overlook as simple and ordinary and that we take for  granted  are truly wondrous!

Source | originally told by Joy Garrison Wasson. She taught English in Muncie, Indiana for over thirty years.  She died on October 15, 2009, after a long illness. She was only 62.

This is a gentle reminder that the most precious things in life  cannot be built by hand or bought by humans.  Very often we’re so busy looking for the big picture that we sometimes miss the little pictures that make it up.